The Valentine as Customer: Authentic Caring 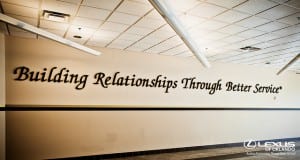 Rick McIntire called me last week!  He was the really great sales person who sold me a GMC Jimmy SUV in Dallas about twenty years ago…that was at least four Lexus’s and a fire engine red Mazda Miata ago.  Rick knows I changed brand affinity because the GMC dealership Rick sold vehicles for is owned by the same company (Sewell Automotive) that owns the Lexus dealership that first snagged my vehicle brand loyalty.  Don’t ask about that Miata!  It was a complete aberration and totally impractical impulse buy.  (But, it sure was a lot of fun for three years.)

The part about Rick’s phone call that most impressed me was the fact that he was not making an out-of-the-blue sales call.  He was not trying to persuade me to give up my Lexus SUV with all its luxurious bells and whistles to return to a GMC SUV.  In fact, he knows I now live in Georgia, not in Texas.  He called because he was thinking about me and just wanted to reconnect.  His call made me deepen my appreciation for Sewell GMC.  It ramped up my likeness for the GMC product in general.  And, it made me appreciate how lucky I was to have the great Rick McIntire on my radar screen.

Innovative service is the Rick McIntire approach to sincerity and authenticity.  Customers value wholesome relationships—encounters with all the con, ploy and gaminess completely stripped out.  The late psychologist Carl Rogers claimed “unconditional positive regard” was the core substance of all healthy relationships.  It means caring without an agenda; serving without an ulterior motive.

During this Valentine’s week, what can you do to show your customers you care about them as people, not simply as a means to a profitable bottom line?  Rick loves his role as an automotive expert who helps customers make wise decisions about a personal mode of transportation.  He leads with a focus on the customer, not a focus on making his sales quota.  And, because of his sincere focus, I’ll bet he exceeds his sales quota every month.