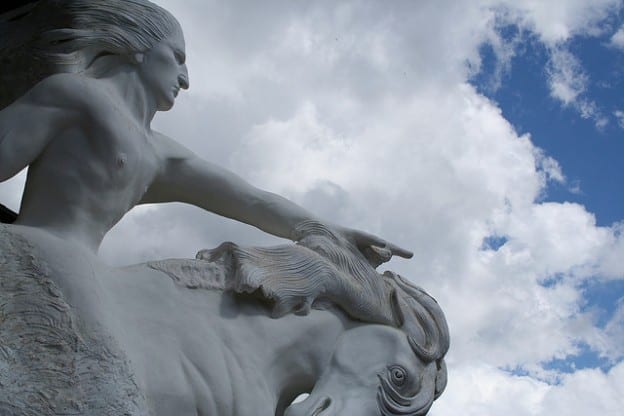 Crazy Horse was a Sioux (Lakota) Indian chief who fought against Major General George Custer at the Battle of Little Big Horn in the black hills of Montana during the summer of 1876. Crazy Horse demonstrated extraordinary bravery in that battle. One witness indicated that Crazy Horse rode closest to the soldiers, yelling encouragement to his warriors. One myth is he reared up on his horse and shouted to the U.S. cavalry, “This is a great day to die!”—a chant picked up by other Indian braves around him. In W. A. Graham’s book, The Custer Myth, one warrior stated, “All the soldiers were shooting at Crazy Horse but he was never hit.”

There is a little known fact about Crazy Horse that makes him a unique role model for organizations on a quest of innovation. According to a fellow Lakota chief, Rain-in-the-Face, some Indian braves went into battle after consuming drugs and/or alcohol. In the book The Little Shadow Catcher by Tom Heski, Chief Rain-in-the-Face claimed that Crazy Horse never needed such help to be brave. He was a true warrior who fought because enjoyed the fight.

The feature that most characterizes innovation is change. The word comes from the Latin word meaning “to renew or change.” It involves bucking tradition, altering an established pattern, or upsetting the status quo. Culture is about accepted norms and mores that bring predictability to relationships and consistency to practices. Innovation lives at the opposite pole from predictable and consistent. Consequently, innovation can be frightening to those who have invested in working in sync with established cultural patterns.

So, how can leaders remove the barriers to innovation? What is required to have more Crazy Horse-like associates–willing to be bold as well as passionate about their mission? Below are four ways to unbridle the “crazy horses” who are the source of innovation.

Provide Loose Control but Tight Guidance. Since “crazy horses” live in the big picture world it is key they be given an accurate view at the macro level but not be micro-managed. They can be successfully led but are poorly managed. External controls trigger their aversion to constraints. They do not deal well with mindless policies, narrow job descriptions, and obsessive hierarchical controls that seek to convert them from “wild ducks” to barnyard chickens. However, they need hard and fast boundaries regarding where an overstep risks the mission. “Crazy horses” without governors can be a clear and present danger to the effectiveness of the organization.

Run Interference for Them. “Crazy horses” need sponsors. They need champions with gladiator-like traits to take on the naysayers and the sometimes frustrated mob. They need someone who always has available a “get out of jail free” card–a defender who can explain their contribution in a fashion that makes defending their foibles completely unnecessary. They need a scout shrewd enough in corporate politics to provide them early warning regarding interpersonal mine fields and lurking group ambushes. Without a front team, “crazy horses” can too often be marginalized and ultimately rendered impotent.

Resource Them. “Crazy horses” need special resources. They need more latitude and a higher tolerance for their error than other associates. They may present a dozen approaches, eleven of which are wacky, but the twelfth could be borderline genius. Discarding the first eleven before reviewing all their ideas can risk robbing the organization of breakthroughs. They need a network of like-minded “innovators” who can function as a sounding board for their most outrageous ideas. For example, one of Henry Ford’s best friends was another “crazy horse”—Thomas Edison. And, they need an entrée to information and access to people who can help them refine their “perfect” idea into an “effective” application.

Celebrate Them. “Crazy horses,” while often the owners of larger than normal egos, need little public affirmation. Applause and attaboys others may cherish are not what drive them–the intrinsic give-back of their work is more than enough. However, celebration can help others learn to value their contribution. Celebration enables fellow employees to separate the person from the performance. It can foster their resilience and facilitate other’s patience. And, if their presence becomes completely intolerable and no skunkworks-like outlet is available, celebrate them by helping them migrate to organizations where their talents will be better used.

“Whatever you can do, or dream you can, begin in boldness,” wrote German philosopher Johann Goethe. “Boldness has genius, power, and magic in it.” Innovation is counter cultural, against-the-grain, and unconventional. And, while the specific act might not be that controversial, it springs from a place that is. It is that place—that restless, unsettled place––which leaders must occupy if they are to support the pursuit of innovation. Bold innovation is spawned by bold leaders who value the “crazy horses” eager to be pioneers and chomping at the bits to pursue a compelling vision.