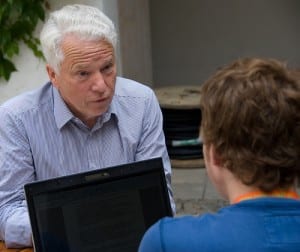 Welcome to the third post in the Protégé Power series. If you missed the first two, you’ll want to catch up by reading this and this. If you’re caught up, let’s continue! When we left off from our last post, Sage was saying to you, the  protégé. . .

SAGE: “Let Dale know you’re eager to get into the thick of the mentoring session. Dale needs your signal now.”

YOU: “Dale, I’m feeling really excited about how this session is going. I’d like to throw out a problem I’m having and get your thoughts on how I might handle it.”

Dale seems pleased with your enthusiasm to get things going. The two of you explore several ways that you might address the problem you’re having. At one point Dale gives you pointed feedback, at another useful advice, and later, as the conversation nears its end, a poignant story about his own struggle with a situation similar to yours in which he eventually solved the problem in a way that would be very difficult for you to try.

SAGE: “Feeling guilty, aren’t you!” Sage whispers in your ear when you least expect it. At least it is confirmation that your ears are working. You were beginning to wonder if that ringing was permanent.  SAGE continues.  “What Dale is doing for you is just as beneficial to Dale as it is to you. Sit up, look at Dale, and show your gratitude. You both have earned this moment. There is no debt to be paid here. Just benefits free for your use.”

YOU: “Thank you for that, Dale. I need to think about it some more. You’ve given me a lot to chew on.”

Dale takes your affirmation in stride and continues to offer a few more suggestions. However, this time his advice is interspersed with questions . . . as if he were poking through a minefield, using your reactions to the questions as guidance on where to step next.

You are beginning to feel as though you have carefully lassoed the conversation back from being a monologue, with you the sole spectator, to now being a dialogue with a valued partner.

P.S. The last episode will appear next week.  You will not want to miss it!